My family and other animals!

In the 1970s my family lived in a crumbling old Shropshire manor house surrounded by a neglected and overgrown garden. My parents and grandparents populated it with various strange beasts and it was rather like living in a zoo! Dad had a spectacular collection of rare pheasants and a peacock who lived alongside dogs, sheep, ducks, rabbits, turkeys, stick insects, guineapigs a goat a cat and a fat little pony. We also tended to be the go to people for sick and injured creatures who often swelled the animal ranks.
I painted this a while back as a celebration of those happy times and presented it to my Mum and Dad on their wedding anniversary.
I'm the kid on the chopper bike going flying in front of the pony! 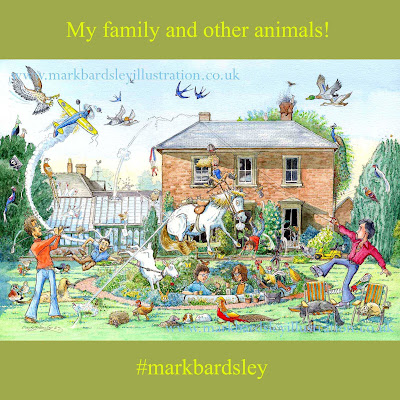